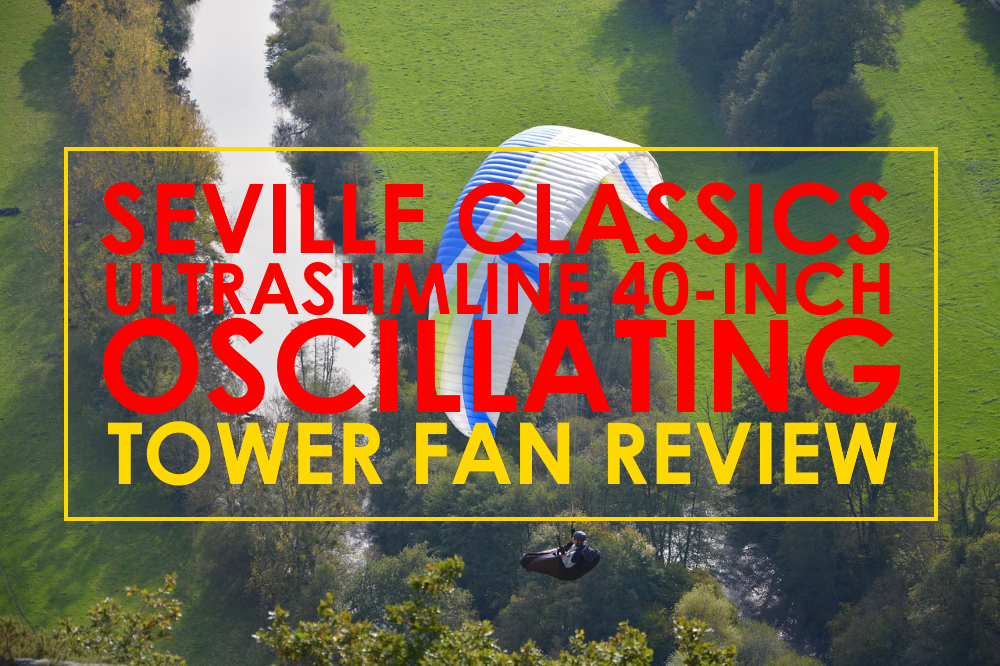 What do consumers say about the Seville Classics UltraSlimline EHF10202B? This tower fan is a 40-inch oscillating device with a tilt feature, which is quite uncommon to even the most popular brands out there such as Lasko.

But is this tower fan worth it? In this Seville Classics UltraSlimline 40 in. oscillating tower fan review, we give you a consumer report about the product. 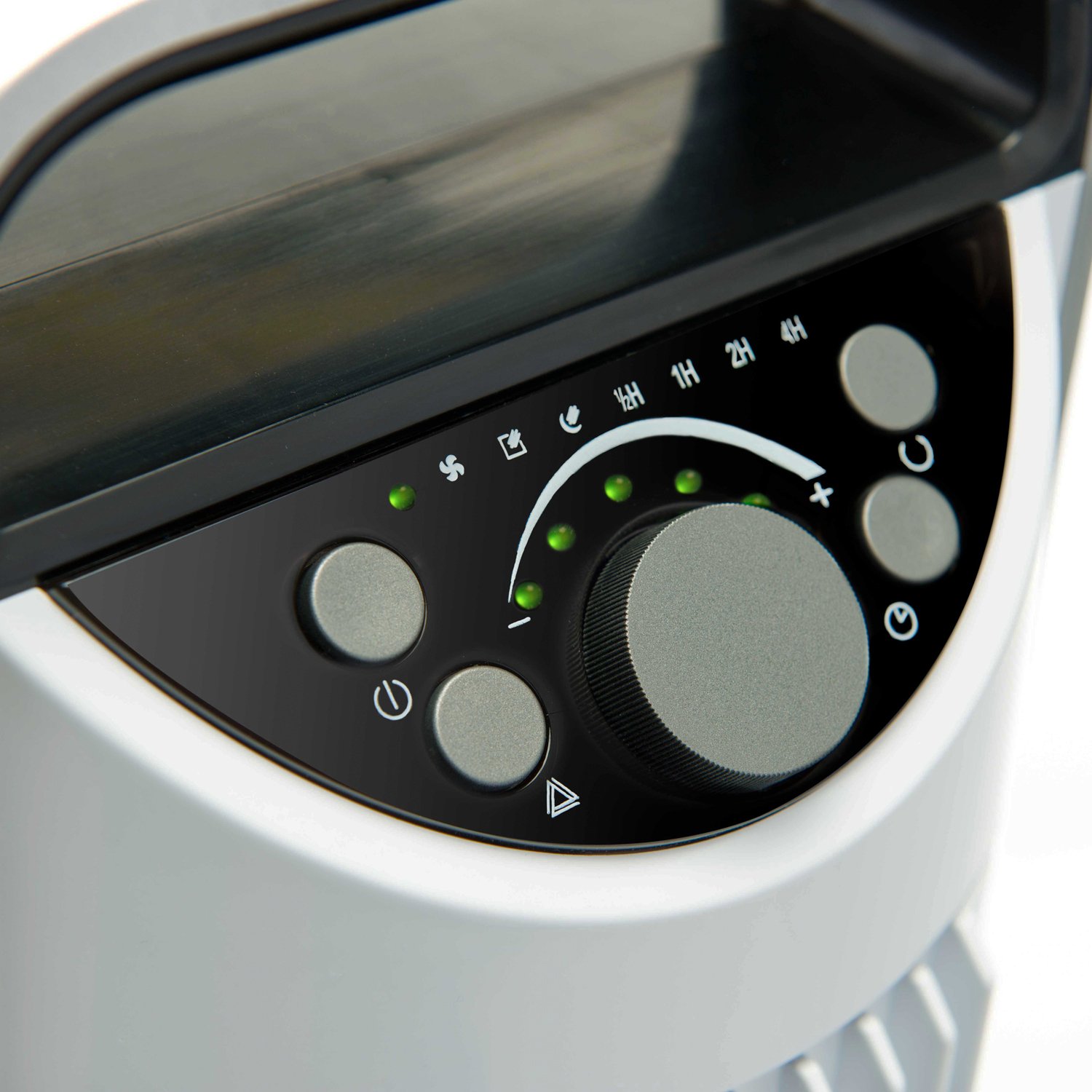 The Seville Classics EHF10202B is feature-packed, and some of these functionalities are quite unique to this model. Here’s what to expect.

– As advertised, this white tower fan has 45 levels of air circulation, which is made possible by the following: 3 tilt settings, 3 breeze modes, and 5 speed settings.

– Based on the abovementioned features, you can customize your unit to control how much air is circulated in your room. Note that the Seville Classics EHF10202B is one of a few fans with a tilt feature. There are 3 settings, to be exact – 0, 8, and 12 degrees. The tilt feature makes up for the lack of louvers, which can come in handy should you want to change the direction of airflow.

– When it comes to construction, most tower fans have a plastic build. But with the Seville Classics EHF10202B, exect a “high-quality reinforced aluminum frame,” which as advertised “provides protection from impact and sturdiness.”

– Many consumers say that their tower fan oscillate only to an arc that measures 90 degrees. But not with this tower fan. Expect a 115-degree turn everytime it oscillates. If that’s not impressive enough, know that the tower fan doesn’t move when it oscillates. Instead, it’s the front grill that moves, thereby reducing the chance that the fan can “accidentally catch loose drapes or curtains.”

– Here are other features to look forward to: remote control and concealed storage, remote range is up to 15 feet, automatic shut-off timer (up to 7.5 hours, 30 min. increments), and only 25 watt usage at maximum speed. 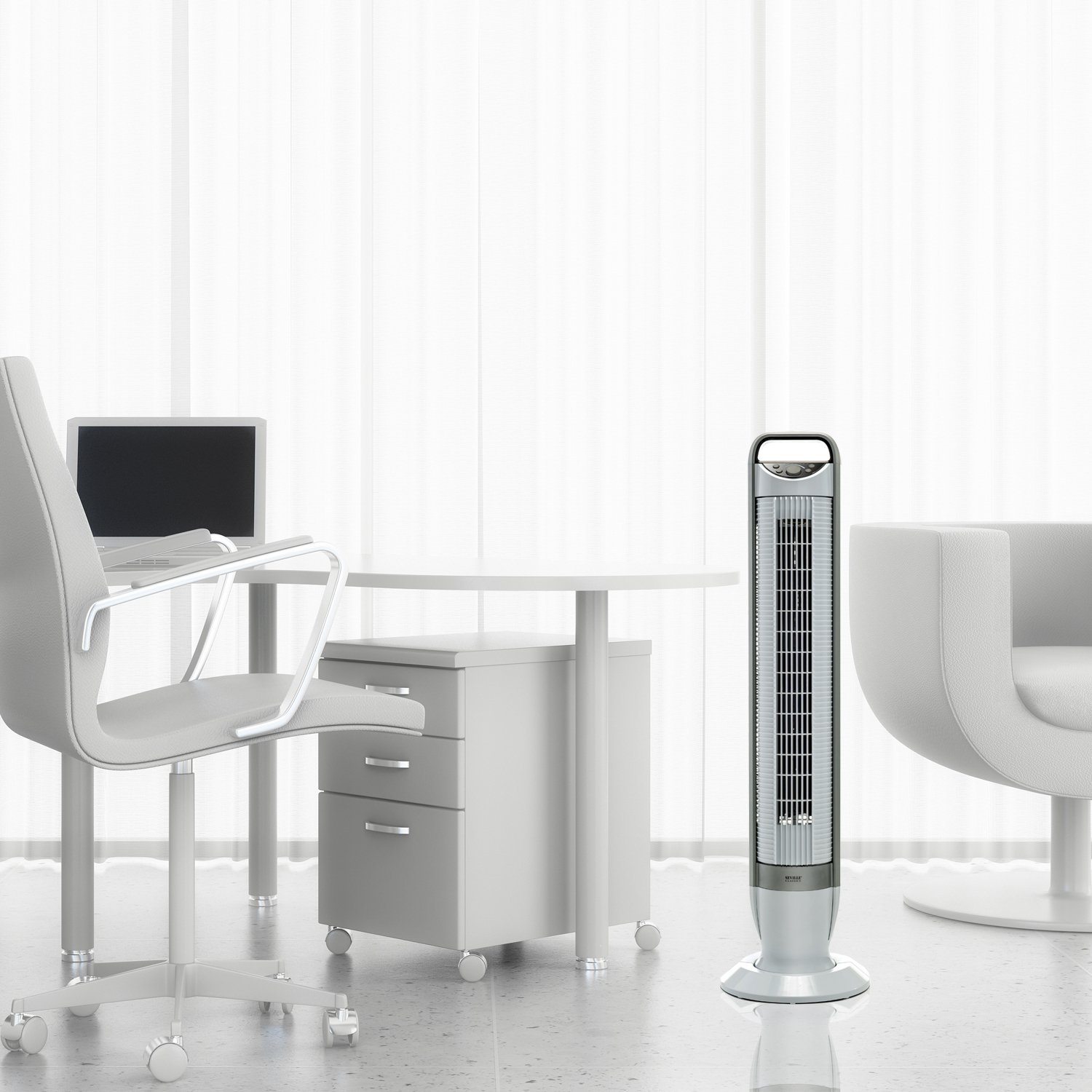 In this section of the Seville Classics UltraSlimline 40 in. oscillating tower fan review, we give you what previous buyers have to say about their unit.

– The Seville Classics EHF10202B is a “bit difficult to clean,” says one user. Taking out the parts by detaching the screws is a big no-no, so the best way is to use a vacuum cleaner with a brush attachment. Seville Classics also recommend using compressed air to blow out the dust inside the tower fan, but this should be done outdooors.

– It’s a “dull white noise.” This is how one person has described the sound this tower fan makes. It’s not the quietest, and it certainly isn’t the loudest fan out there. But you’ll surely know it’s there. One person also shared that he bought 3 of these tower fans, and one of them made a “clicking noise” when the oscillation is on.

– Several buyers say that this tower fan moves a lot of air, but according to one person, the air outflow is not enough given the noise it makes.

– When it comes to features, the tilting function has received a lot of praises from consumers. Adjectives they used to describe this feature include the following: desirable, helpful, a plus, and nice.

– There have been complaints about the remote control. It’s advertised as having a 15-ft range, but some people mentioned that for it to work, you have to point the remote right at the sensor. Otherwise, it won’t change the settings.